The ideal weighing spreader for the smaller grower. 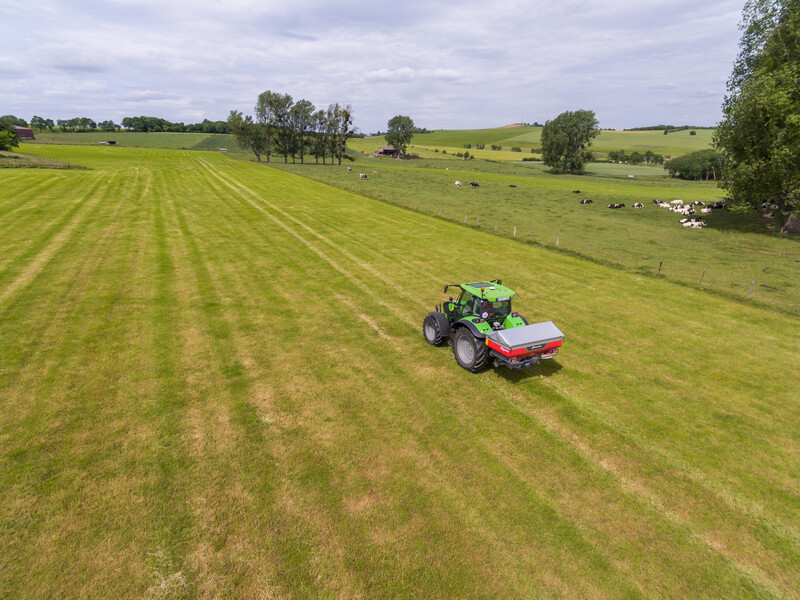 The Kverneland Exacta-CL EW disc spreader is a ISOBUS compatible weighing spreader and have a working width between 10 and to 28 metres. This with a hopper volume between 1,100 and 2,000 kg. This disc spreader is equipped with a weighing system with automatic calibration for automatic adjustment of the fertiliser flow in extreme conditions as rough terrains and in hilly conditions.

The Exacta-CL EW is equipped with a single weighing cell of 10 tonne. This in combination with reference sensor which automatically corrects the measurements for slopes or shocks. The weighing system with automatic calibration compares the actual fertiliser flow with the expected fertiliser flow and adjust the dosing automatically in case deviations occur. This feature will help to prevent over and under dosing which will result in better yields and saving of fertiliser. There is also the possibility to have the Left/Right Variable Rate application, with this feature two rates of fertiliser can be applied in one pass.

Basic Section Control
To maximise your output and business there is the possibility to get basic section control software on the Exacta-CL EW weighing spreader. The number of sections will be increased from 2 wide sections (left and right) into maximum 8 smaller sections (of 4 metres wide). The spreader is equipped with one electrical actuator on each spreading disc to control the application rate to provide maximum use of nutrients to the grass or crops. The basic section control software adjusts the dosing system by a GPS positioning system to optimise overlap and coverage with a minimum over and under dosing. This results in a better yield and a reduction of costs.